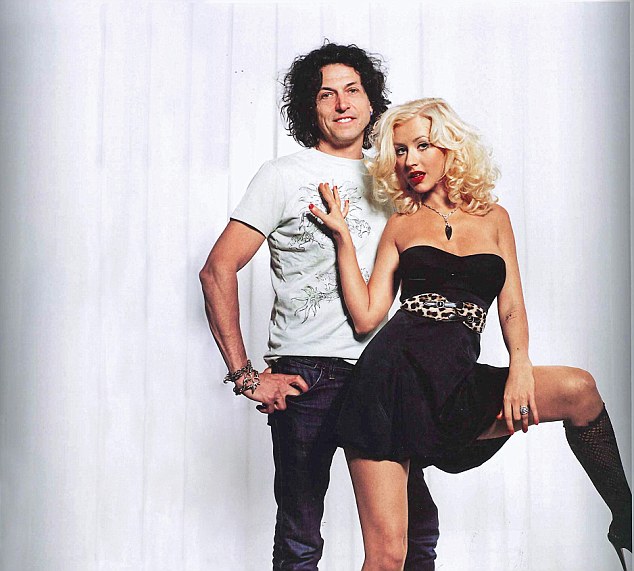 For nearly a decade celebrity jeweler Stephen Webster, 56, pictured with Christina Aguilera, fought a private battle with anorexia [and depression].

I’ll let you ponder that for a moment…

Okay, now that you have that image firmly in your head, you should know that after fighting through his disorder, he is now 154 pounds.

Hardly robust, but not on a feeding tube.

Men of my socioeconomic demographic are often found at the gym, if only because they appear to live in them.

Most are in their late 40’s to early 50’s because that’s about as far as you can push back on the aging process and still land on your feet.

By the time you hit your late 50’s, you can land on one foot, but it’s not as pretty.

Having said this, anyone who’s spent a lifetime keeping fit will tell you that at least a tinge of obsession is necessary to maintain it.

For myself, eating is usually a nightmare.

Let me phrase this another way: For myself, eating is something I have lodged firmly in my head from the moment I wake up.

It’s not like it was back in the day when I looked forward to a breakfast of half and half over Frosted Flakes and two whole eggs over easy in actual butter, which I also applied to toasted white Sunbeam bread.

Now it’s 6 boiled egg-whites and a bowl of steel cut oats with almond butter and a banana.

If I ate the first breakfast for a week I’d die on the gym floor.

First, I need good carbs, ones that burn slowly, hence the oats.

If I ate the first one my blood sugar would spike, then crash…me along with it. And if that didn’t do me in the saturated fat would.

See, blood sugar becomes a big deal as you age, particularly for men like me who workout a lot.

While I am not diabetic, I do experience bouts of hypoglycemia when i don’t take in enough calories to carry me through an intense workout.

I experienced the same thing as a young man, but now I’m more conscious of it, as I am of everything else because I feel more physically vulnerable than I did back then.

This is what I refer to as age-acquired neurosis.

So not only am I not eating anything I feel like putting in my mouth in an effort to avoid all the aforementioned problems, but I also want to keep my body fit and trim.

Now the plot is as thick as pack ice:

1] I think about when to eat so that I have the energy necessary to fuel my workouts.This alone is exhausting.

2] I carefully consider healthy food choice alternative, which is also a pain in the ass.

3] I want to maintain a healthy appearance, which is predicated on the previous two line items. Now eating is kind of like a second job.

Back to Stephen Webster and many others like him, physical appearance can become an obsession after a while because it’s so hard to maintain.

Add an addictive personalty, ambition and vanity, and you’re completely and utterly screwed.

I know men at my gym who are on the hamster wheel, working out 3 times a day in race to beat time.

Most of them are anorexic and in complete denial.

They have no personal lives. And their interactions with others is limited to discussions about workouts and diet.

I’m sure you know a few yourself.

Pity them. They are in pain even if they don’t realize it.

Their bodies are shutting down, their lives have burned down to an ember of balance.

In this sense, they’re already dead.

If you think I’m being overly dramatic, check out Stephen Webster’s struggles for yourself:

I will always dance delicately near the edge in order to meet my needs without falling off the cliff.

It’s a struggle we all face as we age and want to live healthy, balanced lives.

Some turn to “youth-enhancing” drugs to help maintain their strength and low body-fat without having to severely restrict their diets, but they are killing themselves in other ways as they swap one addiction for another.

Average people have no idea what I’m talking about.

But I don’t know any of them.