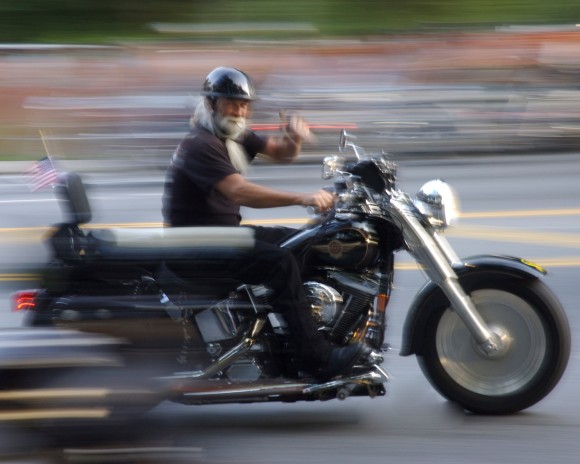 Nothing quite says midlife crisis like the Harley Davidson Motorcycle, right?

Another day, another stereotype.

I’m accused of being in the midst of one for many reasons, not least of which being that I have a young girlfriend.

2] He’s intimidated by women his own age.

3] He’s a narcissist who can stomach his own reflection.

Not to bury the lead, I don’t own a motorcycle – but I find it interesting on many levels.

For one thing, I like it’s group nature. It’s an activity – and for many, lifestyle – that people of all socioeconomic backgrounds can share.

And it’s also damn manly in the traditional sense most men think of it. Think Steve McQueen in The Great Escape.

I think of it as an antidote to the PC virus.

I’m also drawn to the sense of adventure, hanging out with a bunch of guys who, after decades of work, family and Little league, are finally able to bond once again over beer and broads.

It’s an adult rite of passage where the holy “hog” unlocks the key to death with dignity for all, the penultimate send-off into oblivion, finger in the wind at the Devil’s Crossroads.

Come on, tell me you’re not intrigued.

One last shot at youthful defiance.

Don’t tell me you don’t watch those old Zeppelin videos on YouTube in the dead of night.

A 2010 market study by J. D. Power & Associates discovered that the average motorcyclist in the United States is a man who is about 50 years old, and Forbes Magazine confirms that the “sweet spot” for motorcycle buyers is the mid 40s to the early 50s. The problem is especially acute for Harley Davidson, as the 109 year-old company has a customer base that is almost as old as it is. It may just be an urban legend that Harley handlebars are now designed to comfortably support a beer belly during a ride, but it makes sense, given the fact that most older men [not to mention younger men] are out of shape.

Nonetheless, “Google” searches turn up ad after ad of sexily clad young women and handsome, fit young men to fuel the fantasies of middle-aged guys. Motorcycle manufacturers lure older buyers with a promise of a return to their youth and vitality: Male bystanders watch with a mixture of respect and envy, as the women of the town are smitten by the eye candy rolling into town. The riders wink at the ladies and act like the masters of all that they beheld, since they could now afford the luxury of motoring slowly through town.

Yea, and everything else in the universe is also reduced to a cultural stereotype.

My point in all of this is, WHO CARES?

If a guy wants to ride a motorcycle after spending his life chasing the dollar let him have his 2nd Summer.

I agree that Harley’ are loud and obnoxious. So is my stereo system.

Getting older is a drag, folks. We’re gonna act out.

This is because there’s not a damn thing we can do about universal absolutes, so we will absolutely, positively garnish the journey to make the ride smoother.

I might add that many guys ride for charities, raising lots of money for good causes. Others just for the hell of it. So what?

These guys are tough enough to deflect your punchlines, ageist stereotypes, and general ridicule.

Life is supposed to have a beginning, a middle and an end. The same ones, usually.

But for many, myself included, the story arcs are backwards.