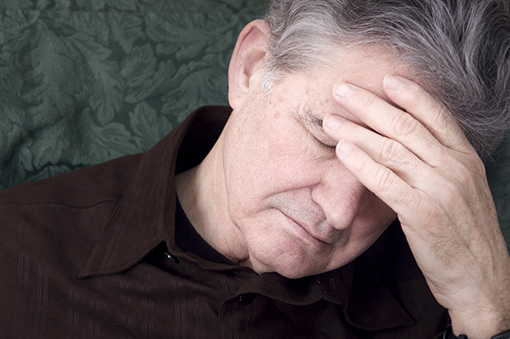 Testosterone is the male sex hormone responsible for the development of many ‘masculine’ traits.

It encourages fat loss and muscle development, as well as sex drive, aggression, and energy levels.

In other words, the more testosterone, the more “Alpha.”

“Low T” has the opposite effect: Use your imagination. It’s bad.

However, the relationship between depression and testosterone is very confusing because they are very similar.

If your “T” levels are low you’ll will suffer low energy, zero sex drive, crappy mood, endless irritability and difficulty sleeping – all of which characterize depression.

Some guys I know attack the problem with hormone replacement therapy.

In fact, most do…with varying degrees of success.

It cheaper than psychotherapy, and with faster results.

Nonetheless, “Low T” is not always the cause of depression, though it might be responsible.

For men who aren’t depressed and have lots of time and money on their hands, increasing testosterone might be an effective way to boost mood to even higher levels, improving drive, libido and motivation.

There’s always a higher high, after all.

But like other indulgences, it can become a one way street.

In other words, once you start, there’s no going back because eventually, the body stops producing it, not that you give a crap.

Most older men don’t care about anything but now, because there isn’t anything else.

Oh God, am I depressed?

CLEARING UP THE CONFUSION

If you’re depressed but don’t know why, you might start by asking yourself why someone with so much feels like he has so little?

This is a therapy question, by the way.

On the other hand, if you also have difficulty gaining muscle, losing fat, keeping your blood pressure in check, or losing your ‘morning glory,’ “Low T” may be the culprit.

Three other factors may play a role in depression:

Okay, so let’s say you aren’t a fan of hormone replacement therapy, and want a natural way to achieve similar results.

Sleep – This is where your testosterone is produced and why rest and recovery are so important. Make sleep a priority in your life. Keep your room dark and cool, and avoid caffeine before bed.

Vitamin D – Vitamin D is responsible for helping your body to regulate numerous other hormonal processes. The easiest way to get it is sunlight. If there is no sunlight where you live – or you’re stuck in an office for 12 hours a day –  supplement. It’s no surprise that all those existentialists came from countries bereft of sunlight.

Saturated Fat – As shocking as this may sound, the most important ingredient in terms of your diet is saturated fat. It’s no longer believed to cause heart problems, but it will increase your levels of good ‘HDL’ cholesterol, which also happens to be what your body uses to make testosterone and other sex hormones. Try a glass or two of full fat milk if your stomach can handle it. It might improve your mood.

Protein – Protein is the building block of muscle. Now you know why vegetarians look like crap. Protein produces anabolic hormones [like testosterone] that encourage muscle growth, among other benefits.

Avoid Plastic – Random, perhaps, research on ‘xenoestrogens’ isn’t pretty. These are substances act like estrogen in the body and significantly lower testosterone.

Along with our more sedentary and indoor lifestyles, this is thought to be one of the big reasons that men today have lower testosterone on average.

To avoid xenoestrogens, don’t eat out of plastic containers, and definitely don’t microwave anything in plastic.

ON A FINAL NOTE

The Stones famously lamented “it’s a drag getting old,” and it’s no surprise that Baby Boomer do struggle with aging more than the generation preceding it.

This makes complete sense to me because Traditionalists lived their lives in throes of World Wars and Millennials aren’t old enough to feel their age.

Note: Baby Boomers are more likely to have been diagnosed with depression (21 percent) than any other generation (Gen X: 18 percent, Millennials: 16 percent, traditionalists: 15 percent).

This aside, Boomers are also more open to discussing their mental health issues than older Americans who refused to admit to having any psychiatric problems at all – a key reason Boomers need therapy in the first place.