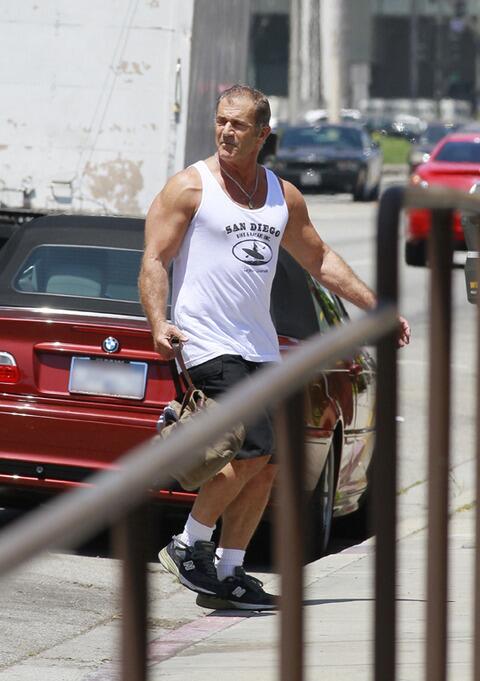 Take a look at Mel Gibson in the above photo.

Notice the vascular character of his arms, veins running like ship rope over rock.

This look is not uncommon for men in their 20’s [with testosterone levels well north of 1000], but it is impossible for 60-year-old men with levels in the 300-400 range, which is pretty much all of us, plus or minus a few.

The only exceptions I have ever seen [and remember folks, I photographed national fitness magazine covers and editorials for 10 years of my career], are men who took steroids early on in their careers and built the framework for what we now see.

Without the drugs, there would be no “framework’ to speak of.

After a while, you can spot users a mile off.

But what’s really interesting about all of this is that taking testosterone is becoming so commonplace that I can envision supermarkets like Kroger offering weekly injections along with flu shots, because like the flu, aging sucks and in many cases leads to death.

Here’s the hook most commonly used to encourage testosterone use:

Anybody, regardless of occupation, can receive testosterone replacement therapy if he experiences symptoms of Low-T.

Please read the above statement carefully.

It says, “if he experiences symptoms of Low-T,” not “if he has Low-T.”

In other words, no blood test necessary.

There is a difference between feeling more fatigued at 60 than you did at 20. It’s called nature, which is more an annoyance than anything else, and therefore testosterone supplementation is a perfectly rational course of action…like recommending 30 minutes a day on a treadmill for diabetics.

I have many friends who self-administer weekly testosterone injections. Others opt for patches, pills and other delivery systems, but injections seem to be the most preferred method.

When asked what they “take” [because it’s so damn obvious], most claim to be “all natural.”

What this actually means is that they are taking “bio-identical” testosterone, manufactured in labs to mimic testosterone produced by the human body.

The interesting news is that because testosterone use has become so commonplace, most people just say “I’m taking 1cc a week of testosterone, so nothing really.”

I know that many of you don’t believe a word of this. Why would you?

You live in a world where people go to work, raise families, play golf and fade in ways designed by nature.

You accept the fact that you don’t look the way you did 30 years ago.

You try to eat right, exercise when you can and pray you don’t drop dead before your 60th birthday.

Most people don’t expect life to go on and on the way it used to…until now.

I have a good friend who is on an elaborate “supplement cocktail,” which has led to explosive mass and strength.

He knows the risks, but in his mind the rewards far outweigh them.

I don’t judge him. We all live our lives the way we choose, and as long as we treat one another with dignity and respect, I support him in any way I can.

If he were using heroin, I would do the same.

The rationale is that life is dangerous, but that shouldn’t stop any of us from living it.

Using this rationale, testosterone use is relative, like getting out of bed.

2] Affluent older men with the financial resources available to offset the cost of “aging gracefully.”

4] Bullied young men who seek revenge against their tormentors.

5] People who have unnaturally low testosterone levels as measured by several blood tests.