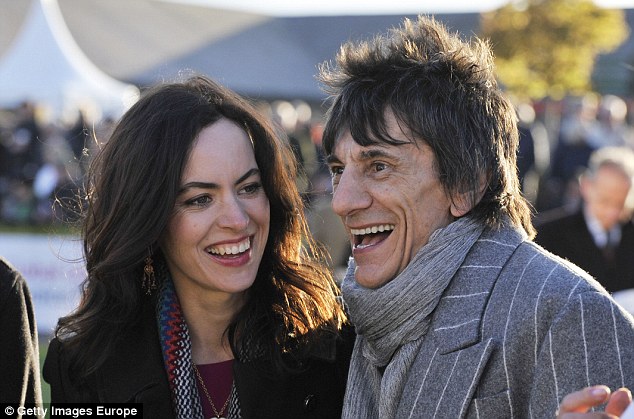 The very last thing he was doing was having children with a woman 30 years his junior.

Then something happened [a lot, actually], and this same man is now clean and sober [for the most part, I assume], propped up by the miracles of medical science, and thus, living like there’s no tomorrow.

This is what fame and fortune [fame + money = relevance] does for most men.

It’s like a blood transfusion that just keeps giving and giving.

You’ll note that many of the comments under the article are dismissive of him and his “relationship.”

People simply can’t resist the temptation to criticize his motives, and hers.

Nothing is real. It’s all one big endless past time for a man who has nothing left to do with the time he’s not touring.

No one in their right mind has kids at 69 without the ability to afford nannies…lots of them.

It’s not that he doesn’t want to be a part of their lives, just not all of it.

As for his young wife, she’ll do her part, with lots of help, while her husband does what he does when he wants to do it, because like he’s Ronnie Wood and the scales have to balance somewhere.

Wealthy older men have reached a point in their lives where they just don’t give a crap what other people think about them and their lifestyles.

For one thing, they don’t have to. Nothing rides on their reputations in the office.

This is the beauty of success. No one can fault you for it no matter how you choose to live out your years.

It’s like a golden wrapper, a force field that follows you around wherever you go.

You walk into a restaurant, hotel, resort property – even local liquor store – and there’s a kind of parting of the waves.

It’s something you get used to, which is one reason men who find themselves suddenly without it blow their brains out.

The story here is really about what it’s like to feel validated for everything you ever dreamed of as a little boy.

For young men there is tremendous pressure to amount to something, to achieve.

And as we age we gauge our success by those around us, hoping that we’re still close to the front of the line, relevant, valid.

All older men validate themselves on their achievements whether they admit it or not.

They subconsciously sum up everything to a series of equations and derive a number that determines their relative worth.

And while some men do not base their lives solely on financial success, I don’t know any.

While vicariously living through one’s children is a fallback position, it really sucks to rely on their financial support.

The moral of this story is that life is a food chain no matter how you dice it.

You have to fight for every scrap, and then live to tell a very tall tale that you and people around you can easily quantify.

It is unforgiving, savage, and brutally objective.

This is why reality television focusing on the super rich is so popular, while anxiety disorders are the most common mental illness in the U.S., affecting 40 million adults…and counting.

Now you know why people beat up on Ronny Wood…and why Daily Mail published it in the first place.

So yes, Ronnie was one lucky SOB.