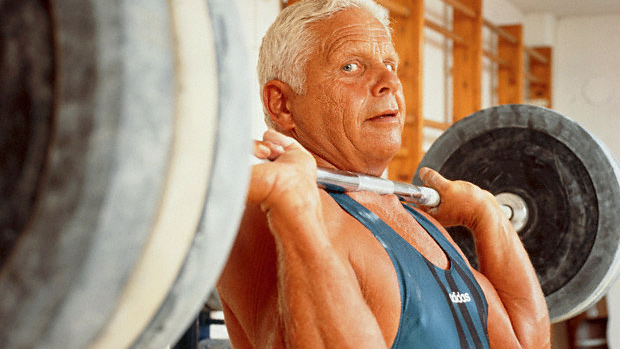 I found this article on t-nation.com about gym etiquette amusing, so I thought I’d share it with you.

Most of it targets the behavior of all age demographics, so I’ve slightly twisted it in the direction of the Baby Boom.

Many are cliches pushed to the extreme, but many cliches are extreme without having to be pushed at all.

After enough testosterone supplementation, many Baby Boomers – both men and women – re-emerge as adolescents and hit the gym like banshees, attempting complex exercises like box jumps and weighted wall balls they see performed by people half their age on Youtube. They attempt to perform them publicly as if no one will notice the sad realities of their efforts. I witnessed one 50-something guy jumping up and down like a Wallaby in what appeared to be a trance. When I asked him what he was doing he just smiled and hopped away. I discovered later on that he just received his first testosterone injections a week ago, and like someone stuck in Purgatory for 30 years, was euphoric over his discovery of a portal back to planet earth.

Many older guys use gyms as workplaces. I’m still not convinced they aren’t suffering some psychiatric disability, the whole thing a pantomime played out using a dead phone. Relevance is found in some of the most unlikely places. Whatever the issue, they are certainly consistent, and therefore, memorable. In fact, offering even the vaguest description will elicit a knowing response. In deference to one man in particular, he is having an actual conversation with someone on the other end of the line, but he is so often on the phone that he is now clinically deaf.

Most of these people begin a steroid regimen to drop body fat without having to spend hours in a gym. They also hope to revitalize their flagging sex lives which certain physicians’ promises of restoring them in exchange for $30,000 a year. Most of these people drop out of sight when their PSA levels rival the national debt and/or they lose a pile in a market downturn.

4] Just About Anyone Doing a Kettlebell Swing

Most older men have no idea what the hell they’re doing in the gym. Without help from a personal trainer, they are like cattle on the edge of a cliff in a hurricane. They’re painful to watch and there is always the temptation to offer guidance. But it has been my experience that guidance is often perceived as a kind of narcissistic wound to men of hubris and resources accustomed to people’s fear and respect in the workplace. Physicians who should know better are some of the worst offenders, as usual. I could get into the irony here.

One old dude threw a cable grip in my direction.

I am guilty of this. There are times when I use one end of a dumbbell rack to perform single-arm pulls. But I am also aware of who’s around me. If I see someone lingering near the rack, I’ll move. The point is that many gym newbies [read: older guys who’ve spent their lives in offices and are now on gym floors at the insistence of their primary care physicians] are slow on the uptake, and even indignant towards anyone expecting them to budge.

I work out around a bunch of older men and women who were – at one time or another – gym addicted. Most of us are now in recovery, but this still doesn’t stop us from spending two hours a day enabling one another. We make a lot of noise when the weights get heavy, but the experience is cathartic, and, in our minds, fine as long as we don’t technically kill anyone.

Some guys attempt to commandeer a 1000 square foot area of the gym in order to perform a particular routine. Most of them are the usual suspects: Affluent and entitled Boomers who are used to having things their way. Fortunately for people like myself, I am comfortable ignoring their boundaries and leading them back to therapy without much in the way of tact.

At my health club there are a few personal trainers who spend more time discussing personal issues with their clients than training them. But this is not the fault of the trainer. When a client is will to pay $100 and hour of someone’s time, they run the show. Of course, the trainer can always fire the client, but it doesn’t make much financial sense as you can imagine. I do happen to know certain personal trainers who won’t train clients that aren’t serious, but I have found that they tend to work less hours.

My gym caters to an affluent clientele, many of whom are trust fund babies who’ve never held a job, and therefore, have no concept of boundaries. The rest are either psychiatric outpatients or narcissists who’ve never seen a therapist.

True story: One day I was in the gym on the stretching mats when I noticed an older man with his junk on full display. A woman next to me happened to notice it at the same moment and immediately deflected her young daughter’s attention avoiding what would inevitably become full blown PTSD. Anyway, I’m not certain whether such men are exhibitionists or just plain senile. I can envision a police interrogation where the officers just shake their heads when the man starts babbling incoherently about the stock market when questioned about a sexually perverse act. Long story short, I reported the incident to the management and I’m told that he now wears undergarments.

Okay, so here are three of my own Pet Peeves:

11] Old Ladies With Too Much Perfume

This one is self-explanatory, but thankfully easily remedied over a private discussion with management. I have, at times, felt almost enveloped in what smells like scented mustard gas as my lungs cry out for mercy at the handiwork of a mortician.

At more upscale health clubs, this is a commonplace practice. The idea is to be in the gym as directed by one’s primary care physician while also getting a little of what the client wants, which is to not be there at all.

Maybe it’s just me, but I see health clubs as urban ecosystems that run according to the sum of their constituent parts. Saying hello is not going to kill anyone. It’s common courtesy if nothing else in an environment filled with people you see every day.

With this in mind, there is one particularly cross older man with a distended midsection that he attempts to conceal with 5x t-shirts pregnant emblazoned with messages of anarchy. He never speaks, never blinks, and always stares straight ahead like a zombie zeroing in on a kill. This guy typifies APD and should be referred immediately to the nearest psychiatric facility. Thankfully, the only other people who come across even remotely this way are cross fitters who relish the outcast model.

Okay, now for the most awesome people in the gym!

Older men and women who go to the gym religiously have the respect of everyone. I’ve never heard a single negative comment or complaint unless the person in question farts, in which case the whole age thing comes up.

Most bodybuilders I know are quiet beasts. They are men of few words [in the gym], focused, serious, and only cordial under duress. I don’t particularly like them [in the gym], but I do admire their determination.

There is nothing more inspiring than women kicking ass next to us. Taking this a step further, I would prefer a gym filled with nothing but buff women in tights. I mean just for the inspiration and all.

It’s hard to beat on a fat person when they’re in the gym trying to climb out of their bodies. It’s a Promethean task no one takes on unless their lives depend on it.

God bless these people for getting back into the world and fighting for their dignity. They’re a lesson to all of us to be thankful that a couple of inches off the waist is all we have to accomplish.

A FINAL COMMENT ON OLD PEOPLE IN THE GYM

Everyone understands the inherent grumpiness seen in the aged, but no one appreciates it. From a psychiatric perspective, you have to understand that many of these old men were once “somebody:” Heads of companies, surgeons, lawyers and so on. They had the respect of their peers and their community. No one questioned their validity, their relevance. This is why many men refuse to retire. The rest face a downhill slalom into invisibility and irrelevance and what you see in their sour demeanor is the loss of something they spent their lives building. I feel sorry for these men. While they go to the gym to stay physically relevant, they’re dead everywhere else.