Daily Mail ran an article last year about the “middle-aged man in Lycra” phenomenon, and since that time the situation has gone viral.

Even the Chinese see the uptick in local Lycra sales.

From the perspective of an older man who went through the Lycra phrase back in the 90’s, I can tell you in no uncertain terms that it’s the middle-aged man’s last stand.

Get used to it, because one way or the other, they’re going in.

They want to be who they once were – or wanted to be – now that they can afford it without having to sell the kitchen sink on Ebay.

Of course their wives of 20 years are dumbfounded witnessing their once normal and well adjusted husbands in clothing and accessories usually reserved for circus acts or Dr. Who reruns.

But this is how middle-age often manifests in men, particularly in those of achievement and ambition.

Some of us buy boats, motorcycles and cars. Others buy women.

But the last damn thing we do is buy into mortality.

Some of us look ridiculous doing the things we do, while others pull the same things off with aplomb.

It all gets down to self-actualization.

If you don’t have it, you end up looking like the caricature in the photo above.

If you do, you end up looking more along the lines of this: 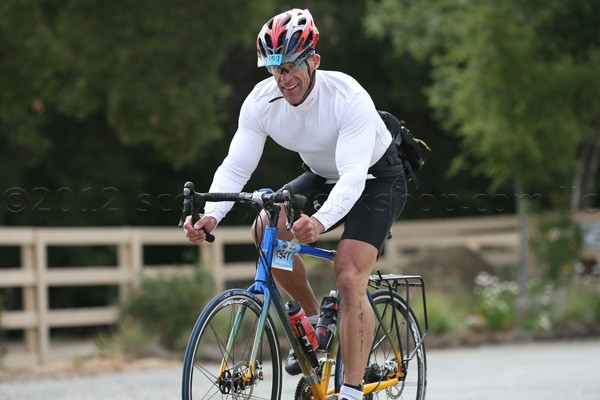 But “Scooby” [pictured above], is a fitness guru, not an accountant turned fitness fanatic in his 50’s.

Most older men who start late with the fitness lifestyle tend to morph from spin class [for cardiovascular health] into walking billboards for cycling manufacturers.

Most of them are late learners who see this as an opportunity to become the men they’ve always wanted to be – but couldn’t – due to 60 hour work weeks, family obligations and travel.

But older men become the scapegoat for everything that doesn’t fade and die the way it’s “supposed” to.

Of course, most men who did what they were told never made it to the top, which is why you rarely hear their wives complaining about their nice neighborhoods.

For many men, cycling is a way to connect with others the way they did back in their college days.

Men are not particularly good at mid-life bonding, so it’s arguable that cycling serves a greater purpose.

Personally, I think that anything that gives men purpose gives the people in their lives hope.

I thought this was funny, so I’ll share it with you.

There’s this guy around me age who spent his life as an accountant for a medium-sized oil and gas firm.

He was a mousy little man, quiet and unassuming.

Then one day he sold his shares in the company and retired with his then middle-aged wife.

Suddenly, the guy shows up last week in psychedelic Lycra biking tights; his arms ripped and muscular, his face sporting a certain indigence that suggested a new-found aggression.

Sadly, his wife who looked totally out of place hanging out with her “new” jacked and steroid-fueled husband, and together they walk towards the gym, the woman trailing behind.

I bring this up because some guys should just stay in the shadows.

As I’ve always said, if you can pull off whatever it is you’re trying to do/be, by all means go for it.

But you need to be self-aware enough to know the difference between pulling it off and making a complete fool of yourself – and your wife in the process.

With this in mind, I’m sure said wife is the next to go.