That more men take their own lives than women is not new. But in 1981 the men’s total was only about double, or just under, the women’s. 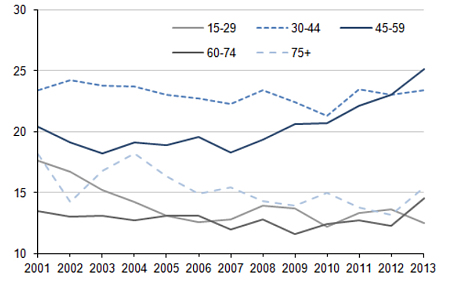 Since 2007, in fact, baby boomers have had the highest rate of suicide of any age group in the United States.

Historically, people between the ages of 40 and 64 have had one of the lowest rates.

To complicate matters, baby boomers are now sliding into the over-65 demographic, an age group that historically has had one of the highest suicide rates. 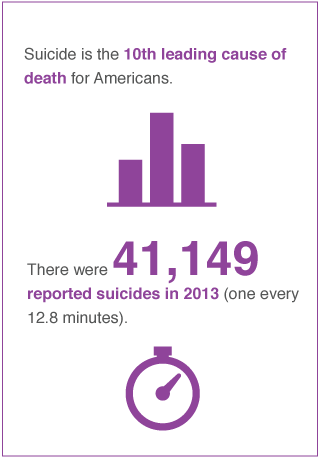 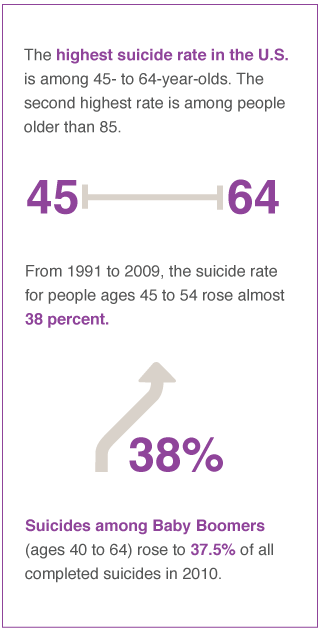 Making matters worse, suicides among middle-aged men with mental health issues have soared by 73% since 2006, which may be attributed to a combination of alcohol, job loss and debt, as compiled by the University of Manchester’s National Confidential Inquiry into Suicide and Homicide by People with Mental Illness.

“Our findings show that within mental health care, middle-aged men are particularly at risk,” said Prof Louis Appleby, the director of NCISH who was formerly the government’s mental health tsar and leads the national suicide prevention strategy. “The problem is not simply that they don’t seek help – they are already under mental health care – so we have to understand better the stresses men in this age group face.”

More men in the UK have died by suicide in the past year than all British soldiers fighting in all wars since 1945.

I’m neither a Sociologist or Psychiatrist. In fact, my only authority in this area is interpersonal exchange and an open heart, for which I have earned several Doctoral Degrees.

Men my age and socioeconomic niche are, generally speaking, over-achievers. They made their “piles” working hard, passionately over many years.

Many have been married and divorced a few times over.

The majority have children somewhere.

Now they’re smack in the middle of the Baby Boom generation, with nowhere to go and nothing to do that they haven’t already been done a thousand times before.

Only this time around, they’re older – a lot older – with far less time to enjoy life the way they did when the journey started.

It’s a small window of opportunity in which to reinvent oneself before everything becomes a hobble along a windswept beach on the edge of oblivion.

With this as a backdrop, here are my 5 top reasons middle-aged men off themselves:

Heterosexual men in mid-life are dependent primarily on female partners for emotional support.

One reason for this is that they’ve never explored anything beyond sports stats with their “friends.”

Women, on the other hand, maintain their independent relationships throughout life – divorce notwithstanding – which is one reason they outlive us.

This is the quintessential dichotomy about men: While we love sex, we love relationships more.

Professor Shirley Reynolds, from Reading University, said one of the reasons for the rise in suicides is the fact only around ’15 per cent of men with depression and anxiety seek help’.

Most men my age practice intimacy-avoidance. They’d rather swallow a pack of Gillette straight razors than open up about clinical depression.

For one thing, depression is not manly. Men don’t suffer depression unless it’s tied to warfare, in which case it’s called PTSD, an acceptable acronym.

Anything else is an indication that you’re either gay and in denial, or didn’t get into enough fistfights when you were a kid.

In either case, you’re screwed in the eyes of middle-aged frat boys who are themselves gay, and in denial.

Okay, I know a few people who put bullets in their heads when the market crashed in 2008.

Not having any money after have a shit-ton of it sucks more than just about anything else, excluding colon cancer, which is a close second.

You lose your house, your cars, your vacations…and usually, your wife.

So now you have nothing at age “60” and have no interest in starting over at Dairy Queen.

I get it. Use the gun. 30 years mopping floors or flipping burgers just isn’t worth it.

Plus you’ll never get laid again as long as you do happen to live.

Many men bought into the notion that marrying super-achiever women – the ones who handle all of the traditionally male responsibilities – was a novel idea…until the women in question left them for real men who could buy and sell them a thousand times, which earned their respect.
It’s been my experience that women want men to be men in the traditional sense no matter what they say to the contrary. I’m not talking about some archaic master-servant relationship, but one where the man is clearly the head of the household everyone look up to.
But these days older men are caught in a cross-fire of conflicting expectations about what it means to be a man. This usually means that when things go South, they don’t have the coping skills to handle the downward spiral.
The bottom line here is that men should take care of themselves first – and everyone else – second.
5] Irrelevance
Okay, so your career is winding down, the kids are out of the house, and your ex-wife is a colossal bitch. What the hell are you going to do with yourself? You already proved to the world that you could become CEO of some star-up and make a pile of money.
Now what?
That job is done, but when people ask you what the hell you’re doing with yourself, you have nothing to say. This means you’re only as good as your last performance – which, by the way, was 10 years ago. Not good. Very bad, in fact. Particularly at society cocktail functions.
Men are inextricably tied to what they do professionally, so if you’re not doing what you were once doing, then what the hell are you doing?
Men need an answer.
If they don’t have one, they dwell on what to say to people.
This often leads to introspection, as in the meaning of life kind of crap and then hookers, drugs and a shotgun blast to silence the noise.
Believe me, older men need a good back story to survive. Otherwise, the only thing anyone will be interested in is conning them out of whatever money they happen to have left over from their glory days.
SUMMARY
Getting older sucks. The best you can hope for is money in the bank, good health, and a competent psychiatrist.
Note that money was the first on my list of must-haves because without it you’re probably better off dead.
How else are you going to afford the psychiatrist?
~~~
For more information, here’s a good article on depression in older men:
http://www.fiftyisthenewfifty.com/mid-life-crisis-depression-or-both/